Families in Chatham-Kent concerned about black, silty water in their wells have been told by the provincial government that their water quality has changed, but not because of the construction of wind turbines.

The farming families are upset with the government after receiving a report that appears to clear North Kent Wind Farms, owned by Pattern Energy, of water contamination complaints.

Now some say they’re scrambling to find clean drinking water in the middle of winter.

“I have a problem with that,” said Christine Burke, while swirling a bottle of blackened water. “It’s a fourth-generation farm and we’ve had crystal clear, pristine water for decades .. and after the wind farm construction it’s gone to where we can’t use it.”

She added her family welcomed green energy to the area, but “not at the cost of my family’s drinking water.”

Jessica Brooks owns another farm in Chatham-Kent whose well is filled with cloudy water. She recently received the results of a study of her family’s well water undertaken by the Ministry of Environment and Climate Change (MOECC) that stated there was a “change in raw water quality,” close observation of all available information on pile driving revealed the construction did not cause the change. 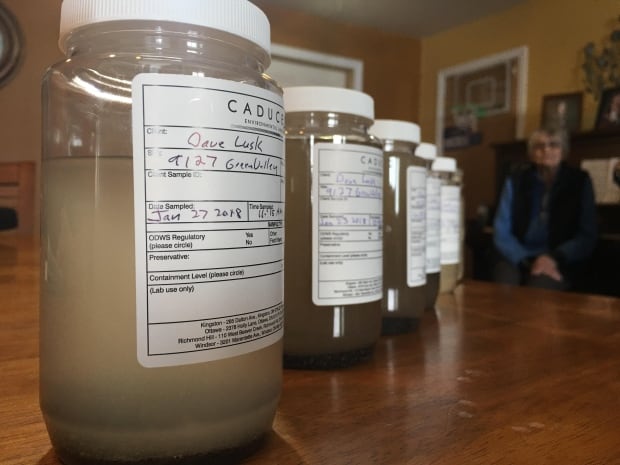 Ontario’s Ministry of Environment and Climate Change has concluded that while the water quality of some wells in Chatham-Kent has changed, the construction of wind turbines is not to blame. (Chris Ensing/CBC)

“Turbid water is certainly unappealing, but according to the Chatham-Kent Medical Officer of Health, in the absence of bacterial contamination there is no health hazard from undissolved particles in the water,” the report added.

“I feel abandoned by my government,” said Brooks. “The government is supposed to protect us and they’re not, they’re leaving us to hang.”

Pattern Energy spokesperson Matt Dallas said the company received 16 complaints about water quality in 2017, nine of them have been reviewed by the ministry. 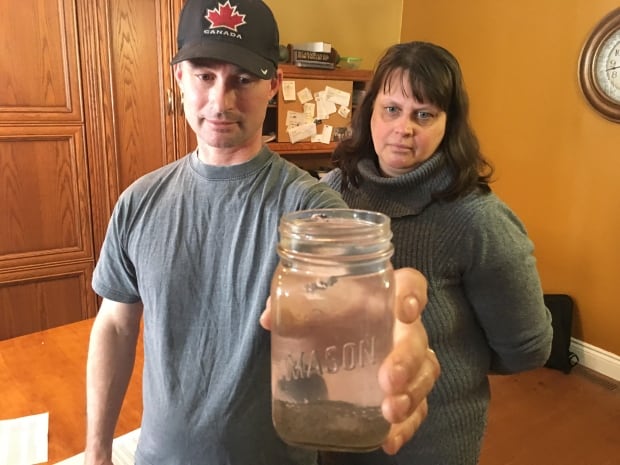 Paul and Jessica Brooks hold up a jar of water from their well that they say is unsafe to drink because of contaminates. (Chris Ensing/CBC)

Brooks and her family have been using a water tank supplied by North Kent Wind for clean water while the government examined their water. Now that the study is completed, the company plans to begin removing those tanks, something Brooks said could leave her family without a source of clean water.

“We’ll contact the water company we’re currently working with to see how much it will cost to keep that tank. I’m sure we can’t afford it.”

MOECC spokesperson Gary Wheeler maintained the ministry takes the concerns seriously and has been holding the company accountable for addressing all complaints.

About the Author: Windsor Pure & Clean H2O To Go